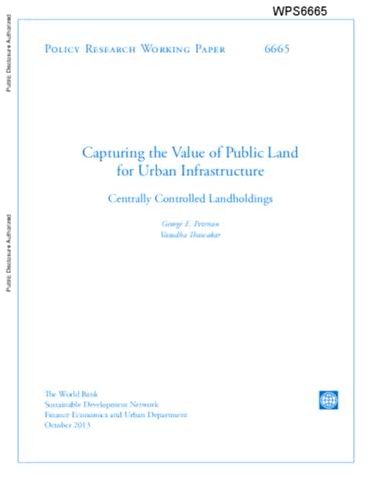 Government entities in India hold large amounts of public land. Their landholdings include some of the most valuable property in the country. Parts of this patrimony lie vacant or underutilized. Public sector bodies also own large blocs of land that sometimes stand in the way of efficient completion of urban infrastructure networks. At the same time, urban India is deficient in basic infrastructure — both network infrastructure needed to support economic growth and urban service infrastructure needed to meet basic household needs like water supply, waste removal, and transportation. This condition raises fundamental questions. Are some of government landholdings “surplus” or not needed for service provision? If so, can their economic value be captured to help finance infrastructure investment? This report aims to document evolving government policies toward pubic land management. It examines how active public entities are in identifying “surplus” lands and attempting to monetize them. Public bodies in India have proved reluctant to surrender landholdings. The report therefore considers practical alternatives that have emerged, such as land trading among public institutions. Land exchange can clear the way for completion of important urban infrastructure projects, without requiring public landowners to declare their property “surplus” and suitable for market disposition.